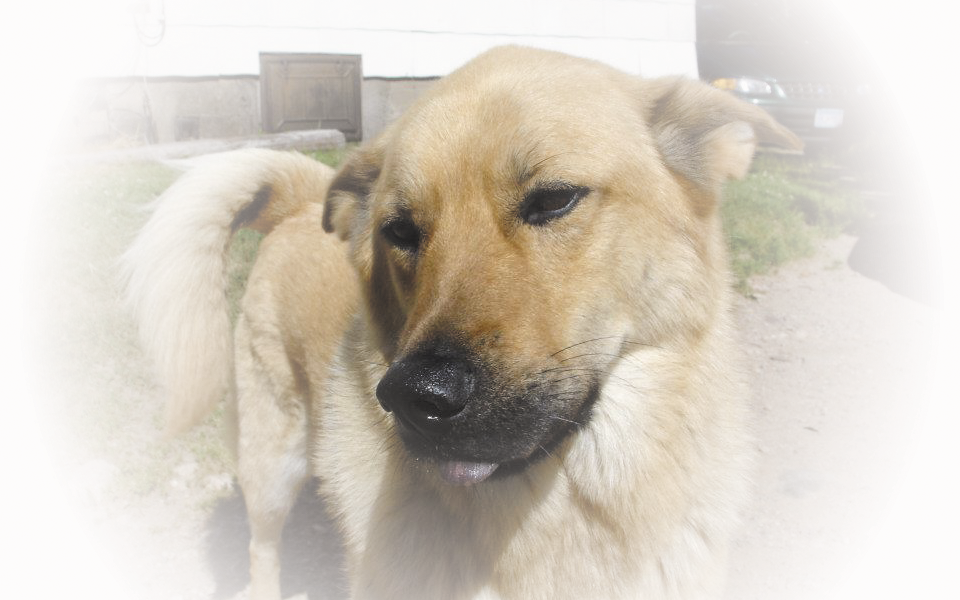 If you came to this page because you googled your dog’s symptoms (retching but no vomit, drooling, pale gums, abdominal pain, distended belly), stop. If you suspect bloat, or gastric dilation and volvulus (GDV), you’re in the middle of a vet emergency and you need to GO NOW.

Our thirteen year old German Shepherd/Akita shelter baby has been in good health his entire life, besides hip dysplasia developed as a puppy. He is a quiet, respectable, gentle dog, fiercely loyal and loving to his human packmates. Last Tuesday the 24th of June, 2014, after eating a portion of his dry food, Kody began retching and drooling. He moved to the door, so my boyfriend let him outside. Nathan followed him out because of his odd movements and the way he was hacking. He yelled for me and when I got outside, Kody was almost to the neighbor’s yard. This was another warning sign, as he knows our yard boundaries. He was seeking solitude, wanting to avoid being seen in pain/weakness. He was so hunched over that he was almost walking on his hindquarters, in obvious pain in the abdominal area. He finally laid out flat on his belly, legs forward, still hunched and eyes wincing. Nathan was looking up the retching, drooling, hunching symptoms as we followed Kody. We left him briefly outside to grab car keys once he figured out it was a vet emergency. When we got him up and moving again (he knew he needed help), his belly was noticeably distended. We were fairly certain it was bloat, and that time was critical.

The emergency vet staff quickly took action. We opted for surgery late that night, even though the vet warned that you never know what you might find when you open up an old dog. They first decompressed his tummy and emptied it. It was like a twisted balloon in there, slowing bloodflow to the heart and stopping blood from getting past the tummy. This is one reason time is critical, as the longer you take to get to this step the worse off the inner organs will be. Another reason – the MAIN reason to rush – is that the pain is agonizing, the dog is in shock, and the heart is racing.

While Kody was being stabilized, they ran bloodwork to better guess his odds of survival. When counts were in the clear, and x-rays showed no other signs of alarm, they cut him open. The surgery, called gastropexy, tacked his stomach into a normal position by attaching it to his ribs. Without the surgery, his odds of rebloating were 75%. Now, he has a 6% risk of rebloat. In surgery, the vet was also able to see his tissue was pink and healthy, which meant we caught it before any more serious damage could be done.

Kody had to be transferred to his regular vet the morning of the surgery, and complications (sutures popping open) led to a second surgery the same afternoon. They loaned a stretcher so that we could safely transport him back to the ER vet for overnight care. He began eating that night, and showing a little of his stubborn personality to the staff. They gave him a meatball, and then a medicated meatball. (He is taking Tramadol and Carprofen for pain, Zenequin for antibiotics, Metaclopromide for digestion) He gobbled the first but turned down the med one, turning his back on the staff with a huff of indignation.

Kody was released to our care Thursday morning. Nathan made a stretcher to keep him safe in the car. At first, we restricted him to a small area of the living room. We used two couches to block a spot by the sliding doors, giving easy access to outside. I slept on the couch all weekend to keep an eye on him. Each day was a little better, a little easier. After the critical 48 hour period, we blocked off the kitchen and living room for him, giving mobility but not much. Now, he has access to the main floor and the sunny white room that he loves (for the view, and the carpets). He eats many small low fat soft food meals throughout the day, instead of two dry food meals per day. We added pumpkin to his diet as a safe fiber-rich “treat.” He’s still not allowed to jump or run or get too excited, but those chipmunks and squirrels better watch out when we get these staples removed next week. Lawn enforcement will be ruthless 🙂

In this situation, the fast actions of Nathan, the ER vets, and the Banfield staff kept Kody’s beautiful soul in his beautiful, furry manbeast body. He is an old man, but life is priceless and he still has so much love to give. This dog has touched so many lives, but surviving GDV serves as a harsh reminder that our world is so fragile, and our spark can be snuffed out at any moment. Treasure each cuddle and every tummy rub. He won’t be here our whole lives, but while he is, he makes our lives whole.

Love what you see? Don't be shy! Get in touch!

remember:
it's not going to design itself